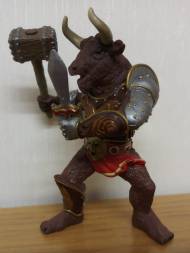 We are very glad that Ms. Maria Kendler will be coming to Hong Kong to offer sandplay therapy training in November. We are going to study a journal article written by her: “Must Theseus Kill The Minotaur? Coping With Destructive Aggressiveness in Sandplay Therapy” in our next study group.

We will look at the meaning of the image of Minotaur-like scene in the sandplay process. In Greek myth, Minotaur, a monster with the head of a bull and the body of a man, was kept in the Labyrinth in Crete, feeding on human flesh until destroyed by Theseus. Seemingly, it was the scene of using violence to crucify violence. In her article, Maria raised the question that the killing of Minotaur would not bring an end to the cycle of destructiveness. In the sandplay process of a young child, she suggested alternate connections to resources other than rage and aggression, aimed to help the young child to step out of the spiral of destruction in his symbolic play. Additional case studies from the presenter will be used for illustration of the symbol Minotaur in the study group.

This entry was posted in Study Group. Bookmark the permalink.