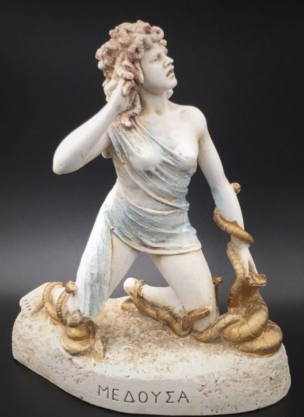 We will continue our exploration of Greek Mythology in our upcoming December Study Group. In November study group, we had confronted the minotaur, and this month we are going to encounter the dangerous beauty – Medusa.
In Greek mythology, Medusa was a monster generally depicted as a winged human female with living venomous snakes in place of hair. Those who looked at her face would turn into stone. The image of Medusa particularly her head is commonly found through ancient artwork to modern popular culture such as the symbol of Versace (high-end fashion).
In order to learn more about this image, we are going to look into the classical myth of Medusa and the meanings associated with it. Sandplay case will be used for illustration.

This study group is only opened to members of Hong Kong Sandplay Therapy Association.

This entry was posted in Study Group. Bookmark the permalink.